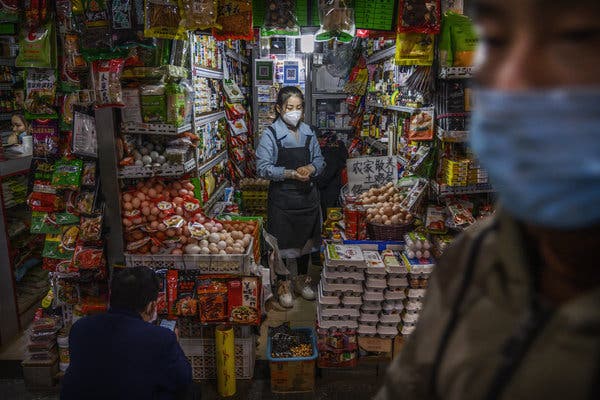 Above: a market in Beijing . The Chinese economy ground to a near standstill, and many small businesses ran out of cash. [Kevin Frayer/Getty Images]

Despite many predictions over the years by the World Health Organisation that a new pandemic was fairly certain, fairly soon, capitalist governments and businesses failed to do the research and development in advance that could have provided us with medical capacity to limit its effect, or environmental measures which might even have prevented the outbreak.

The Covid 19 pandemic has laid bare the lie that the welfare of the population can be “left to the market”. Only now, very late, have the ruling classes recognised that the destruction mandates coordinated, collective, market-flouting action, and this action is being taken by capitalist governments in their own capitalist way.

In China the initial response to the outbreak was to suppress information. For six weeks no meaningful action was taken to address or contain the emerging zoonotic infection. The state then flipped from punishing the whistleblowers to police-state measures to try to contain the outbreak.

In any case, the infection had already begun to spread to other countries. One by one, most of the worst-affected states have been imposing “lock downs” once the infection rates exceed certain levels. Iran has not imposed measures in the same way, and its figures do not appear to be accurate.

The US has not been able to obtain accurate figures due to multiple difficulties about its organisation of testing. There appears to be a strange lack of cases in Africa, not fully explained (Vaughan, New Scientist, 14.3.20). In many countries, we don’t know whether low counts reflect low impact of the virus, or low capacity to conduct tests and collect figures.

The UK government to date appears to be trying a different strategy, or at least differently-timed strategy, from the “sudden-lockdown” tactics of other states. This different strategy has been criticised both by right-wingers like Tory politician Jeremy Hunt, and by some on the left, for being not strict enough.

We should not trust the British government to act in our interests, but neither should we trust the model adopted by equally right-wing governments elsewhere like Austria’s. The UK’s stance seems to have been devised not so much by the Tory politicians, but by scientists, notably Chief Medical Officer Chris Whitty, who as far as we can tell is well qualified to advise (for more see Neville, FT 14.3.20).

We on Solidarity feel well-qualified to raise issues about the need for full sick pay for all, about the need for government action to ride roughshod over profit considerations to requisition extra NHS and medical-production capacity, and so on, but not to second-guess the medical experts.

As our lives depend on it, the population should have access to the underlying evidence. That has not been shared by the government so far.

And however well informed or astute the scientists are, there remain many things about this virus that are not yet known. Probably even the best-calculated expert response will turn out to include errors of some scale or another.

The much-needed funding for research into medical responses has now become available, and work has gone on to try to find a vaccine. This work has been an international collaboration partly funded by Cepi (the Coalition for Epidemic Preparedness Innovations, set up in 2016).

Within just 42 days vaccines have emerged which are ready to be tested from several companies in different countries. At the same time previous knowledge has been put to use and tests are underway to explore whether other medications can help mitigate the effects of the virus for those who already have it, including treatments that have been developed for ebola HIV, flu and malaria (Mackenzie, New Scientist, 14.3.20).

This rapid development demonstrates how much can be achieved in a short time when the funding is available. Faced with a threat which hits the whole of capitalist society, including the ruling class, capitalism is able to break down barriers to use technologies, allow international collaboration, and free up streams of funding almost instantly. Many things that we are often told are not possible become possible when the whole system, including its profits, is threatened.

There has been some level of international collaboration. But the competition between nation-states remains fierce and this has sometimes overridden wider capitalist interests. As usual the working class pay the price.

Some restrictions to movement are necessary to reduce the spread of the virus but Donald Trump’s abrupt announcement banning flights from Europe is of dubious value and has fanned the flames of xenophobia.

Italy has been the second worst affected country so far. Its health system is buckling under the strain. Yet when the Italian government asked for aid from EU neighbours, the response from European Central Bank president Christine Lagarde implied she wouldn’t act to keep Italy in the eurozone. That resulted in market crashes, and gave succour to the far right.

Rather than giving aid the German government banned the export of face masks so a German company supplying Italy could no longer do so. For its own reasons the Chinese government delivered 31 tonnes of equipment to Italy including ventilators (Hall et al, FT, 14.3.20).

In the UK it seems the government has calculated that concessions are wise to avoid civil unrest. The ruling class has thrown some crumbs down from their table, especially where trade unions have been pro-active.

These include the moves to shore up the NHS and measures such as allowing the self-employed and those on zero-hours contract have the tiny sum of £95 per week statutory sick pay immediately rather than having to wait until the end of the first week of illness.

Yet the fate of some of the most vulnerable, including the homeless and those in prison, has largely not been discussed. The welfare of prisoners in Uyghur detention camps in China and in Iran’s jails is largely unknown. The conditions of refugees in Idlib, in Turkey, and in Greece meant that children were dying even before the outbreak. Measures to manage Covid 19 are likely to be near-non-existent.

Struggling businesses all over the world are swiftly minimising losses by sacking workers despite emergency measures by international banks. Without consumers it make no “business sense” to continue to employ people. The efforts of bosses to make workers pay, as far as possible, for the worsening and unfolding economic crisis, risk turning the crisis into a snowballing slump.

If we lived in a socialist society, we might have been able to prevent this outbreak, or at least contain it quickly and have medication ready to mitigate the effects. Without the dominance of profit, research that began with SARS and MERS could have continued. Protecting our ecosystem and having a better understanding of zoonotic illnesses would reduce the risk of outbreaks.

If a widespread outbreak occurred in a socialist society there would still be the need for centralised and authoritative responses both at a regional and global level. But those at the centre would be accountable to the general population, and do their jobs without special privileges. The action would be more effective as they would be more likely to be trusted.

With background research, and an already functioning network of research centres and international comprehensive public health provision, cases would be more accurately tracked as they emerged, and this data used to inform the development of effective methods of managing the pandemic.

Without a system relying on market rules, production can be planned and altered according to need. The UK government is showing that a little of this is possible under capitalism as they seek to repurpose hotels and car factories to produce the things that are necessary for health provision now.

In a socialist society there would be no need for negotiation and buyouts. The decision to adjust the focus of production would be a routine thing. There would not be the imminent threat of financial meltdown. Production could shift to increase provision of health-related products for the duration of the crisis, and change again or close unneeded units afterwards.

Without the limits we have on education and career opportunities in today’s society, probably more people would have knowledge and skills in multiple areas of interest including healthcare related sciences. Quite feasibly, many workers in other industries would have some basic knowledge of health care so that they could be deployed in a crisis.

Without worrying about rents and overheads places like theatres, pubs, cinemas, places where people gather, could temporarily shut without going bust. There is no reason why people should not live rationally and be able to do what is needed in society at a given point in time without being limited by the need to turn a profit.

The workers, the majority of the global population, do not yet rule ourselves. We have a small rich ruling class that makes much of the necessary organisation chaotic and is likely to result in huge numbers of unnecessary deaths soon. But the fact that we are the producers of all goods and profits, gives us power and we need to organise to use it.

The need for many people to self-isolate will result in multiple hardships and poverty for many. Having decent benefits and social provision to sustain the welfare of the most vulnerable in our society will save lives and improve conditions..

This is a global problem and must be tackled internationally. Huge aid programs are needed to build and sustain healthcare provision in every country in the world. This is needed to allow the global population to recover. More investment in research and protection of the environment to prevent and control future outbreaks is needed.

The agency to make these things happen is not the capitalist governments, who by their nature are driven by the demands of profit. Only the organised international working class can build a society in tune with the global needs of humanity.

4 thoughts on “Covid-19 and capitalism”