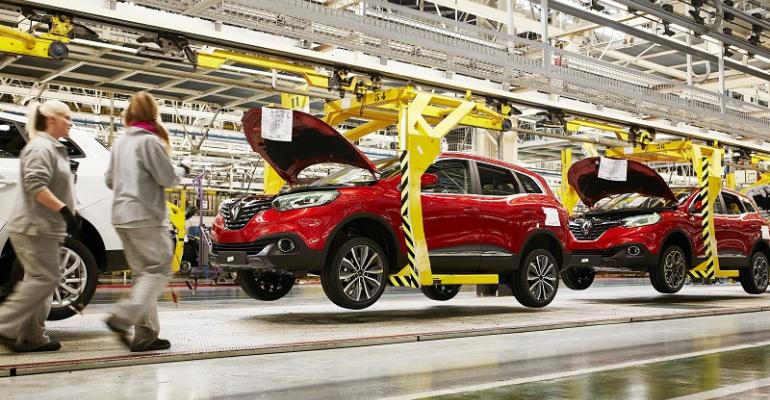 Wednesday’s Morning Star carried an interesting editorial about state assistance for companies hit by coronavirus and the lockdown:

Private firms are quite happy to take state handouts but do not conclude this comes with any obligations to society in return – a situation reminiscent of the fallout from the bankers’ crash 12 years ago, when bailed-out banks carried on inflating the housing bubble rather than invest in the productive economy.

There is nothing inevitable about this. State assistance can come with conditions. France’s approach to its crippled automotive industry is a case in point.

Car manufacturers have pointed to the collapse in sales due to the lockdown and called for immediate financial assistance, plus delays to environmental regulations, in response, using the fate of millions employed directly and indirectly by the industry across Europe as a bargaining chip.

Yet French ministers say they will act to save the industry and its highly skilled workforce – but on terms that actually accelerate the transition to “green” production, including by state subsidies for electric vehicles.

The details of the French plan have not been published, and the Emmanuel Macron government has a brutal anti-worker record. It is quite possible that its rescue package will come with a sting in its tail when it comes to jobs, terms and conditions. But the example illustrates the basic point that state intervention gives the government power to shape the behaviour of companies and even whole industries.

This struck me as very interesting – and pretty amazing, given that the Morning Star (and its political master, the Communist Party of Britain) has spent years claiming that EU state aid rules made such state assistance virtually impossible – and when it was pointed out to them that this was patently untrue, then fell back on arguing that any state aid that was allowed by the EU, always has strings attached: now, they seem to be supporting the strings!

I asked Comrade Coatesy – something of an expert on French politics – for more details of this and he replied by telling me it’s all part of what the Macron government calls “ecological transition” – including tax measures (in effect, subsidies) for people to buy cars (and not just electric ones) and to companies, notably Renault.

He added: “Oddly, oh so oddly, the Morning Star does not mention that Greenpeace are not happy. One point Greenpeace make is that the plan has SUVs as part of the strategy to increase sales”.

“As you say, the Morning Star has claimed for decades that this sort od state aid would be impossible in any form within the EU!”

Coatesy directed me to the following article from Greenpeace France:

Support plan for the automotive sector: big concern of NGOs regarding the ecological transition of the sector
Posted on May 20, 2020

The Minister of the Economy announced at the beginning of the week a plan of massive support to come for the automobile sector, in the form in particular of tax measures aiming to encourage the purchase of new vehicles, the details of which must be revealed in the next days. While a first bank loan of five billion euros, guaranteed by the State, is almost finalized for Renault without any social or environmental conditionality [1], Greenpeace France, the Nicolas Hulot Foundation and the Climate Action Network are worried the priorities of the automotive sector [2] and the real desire of Bruno Le Maire and the government to impose on the sector a trajectory compatible with the climate challenge.

“At present, the automotive sector is not consistent with the ecological transition, recalls Agathe Bounfour of the Climate Action Network. State aid should allow industry and the market to be reoriented in depth, but that is not what is looming. If public aid makes it possible to encourage the individual purchase of large SUV-type vehicles, even electric or hybrid, it is climate and social nonsense. Priority must be given to supporting households, especially the most insecure, who are dependent on polluting vehicles. ”

The government must clearly rule out the option of yet another scrapping premium for thermal vehicles, including the most recent. But more importantly, we must put an end to the logic of the all-SUV. Car manufacturers rely heavily on these urban 4 × 4 for their commercial development. In Europe, SUV sales jumped from 8% in 2008 to 32% in 2018. And SUVs are presented as one of the options for emerging from the crisis for the French automotive sector. However, SUVs, thermal or hybrid, because they are heavier and less aerodynamic, consume more fuel and emit more than “traditional” cars. They have been the second largest contributor to global CO2 emissions since 2010 after the energy sector, according to the International Energy Agency. The electric SUV, whose environmental impact for the production of batteries and electricity is increased tenfold, also offers no viable future for the automotive sector and employment.

“This exit from the crisis should mark a turning point in the automotive sector,” said Marie Chéron of the Nicolas Hulot Foundation. The challenge is to strengthen the resilience of this sector and jobs while putting this industry on the rails of ecological transition. For this, the sector must adapt to the need to rethink the place of the individual car in our trips and must focus now on the production of the most efficient vehicles, and define an investment strategy: production of batteries, recycling and light vehicles for the market, training. This will not be done without accelerating the end of production of diesel and then petrol cars, and the abandonment of the whole SUV. Clear signals are needed for the market, the weight penalty for new vehicles is one of them. ”

Electric vehicles: not the silver bullet

Bruno Le Maire wants to encourage the purchase of “clean vehicles”, potentially in the form of tax assistance, to promote the recovery of the automotive sector, but he misses the point. The electric car is not the miracle solution for developing sustainable mobility, especially as long as a real transition to renewable energies is not initiated. Although an electric car has half the climate impact of its gasoline equivalent over its entire life cycle, it nevertheless emits greenhouse gases at the various stages of its production, in addition to impacting ecosystems during extraction of minerals to produce batteries.

“All vehicles, even electric ones, have a cost for the climate and the environment,” continues Sarah Fayolle, transport campaign manager at Greenpeace France. The challenge must be to reduce the number of cars on the roads, in favor of shared mobility, such as carpooling or car sharing, and other modes of travel, such as the train, public transport or bicycle. A plan to support the automotive industry without taking into account this major issue of reducing our dependence on solo cars and without ecological conditionality would be a new blank check from the State for a polluting industry and for its SUV ”.

[1] The group is reportedly considering the closure of four factories in France.
[2] https://www.usinenouvelle.com/article/exclusif-il-faut-localiser-les-vehicules-electriques-en-france-l-appel-de-herve-guyot.N964401
https: //fr.reuter