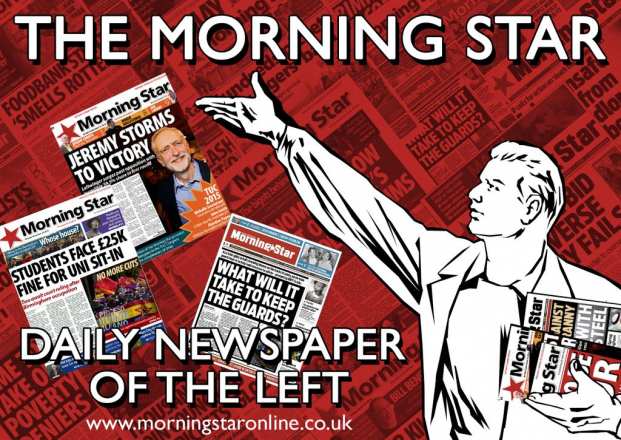 Whether or not Chief Rabbi Mirvis is a Tory is not the issue. His attack on Labour over antisemitism spoke to a real problem.

Even the Morning Star, in a rambling, incoherent editorial (in the 27 November print edition but not on their website) noted that a 2018 poll conducted for the Jewish Chronicle “said more than 85 per cent of British Jews think Jeremy Corbyn is anti-semitic”, concluding (in a first for the Morning Star) “Labour must open a more productive dialogue with the whole spectrum of British Jewish opinion and detach the malign motives of some to deal with genuine concerns that are rooted in real experiences.”

That small, faltering step forward by the paper was offset in the same issue by Jewish Voice for Labour’s Mike Cushman describing claims of Labour antisemitism to be “grossly exaggerated” and which had “reduced the quality of life and personal security of Jews.”

Cushman told the paper that the issue was that “Jews, like non-Jews, have need of schools, hospitals and homes” but risk losing the opportunity to benefit from “Labour’s
transformational manifesto” through “this fear campaign.”

Jewish Voice for Labour is an organisation set up to minimise (often, deny altogether) any suggestions that there might be the slightest problem, under Jeremy Corbyn, with antisemitism within Labour. Some of its leading figures have also suggested that it’s not a serious problem in UK society as a whole.  Cushman’s comments came very close to a response that a writer in last week’s Solidarity described as “especially obscene” and caricatured as: “Because of your selfish, and probably manufactured, concerns about antisemitism, you’re going to be complicit in policies that kill people; and if you’re prepared to do that … maybe people were right to hate you in the first place?”

If Cushman didn’t go the whole way in living up to the “obscene” caricature, another
Morning Star article did: in a quite extraordinary piece entitled “Rabbi Mirvis is overplaying his hand” followed by the strap-line “Voters are being asked to call the rabbi’s bluff in the face of increasingly unbelievable allegations – and this relentless politicking only threatens the safety of the Jewish community”, one Adam Lewinski launched into an attack on the entire British Jewish “leadership” (including the “far-right extremist Rabbi Jonathan Sachs”) who – according to Lewinski – have a “four-year history of anti-semitism smears directed at the party.”

Lewinski went on to issue what I can only understand to be a threat towards all Jews in Britain: “They [Jewish leaders] are, in effect, playing a dangerous game of chicken with the electorate; explicitly asking them to place their faith in the word of official institutions purporting to represent the Jewish community over and above their hopes for a better country for themselves, their families and their children.”

If that’s not a demand to Jews (all Jews – not just the ‘leaders’) to shut up about antisemitism, at least during the course of the general election. It contains a clear threat to Jews: stop playing this “dangerous game” or risk antagonising the rest of the “electorate.” If that’s not a nasty, menacing demand, I don’t know what is. The possibility that the author may himself be of Jewish heritage doesn’t change that in any way whatsoever.

And here’s a strange thing: although the Lewinski article appeared on the Morning Star
website (and can still be read there) it never appeared in the print edition.

It must never be forgotten that in June 2018, a writer in the Morning Star proclaimed “mainstream Jewish communities everywhere… appear unwilling to accept the connection between developing international anti-semitism (or anti-Israel sentiment) and Israel’s decades long … acts of barbarism”.

The article continued: “No amount of protestations about the symptoms of rising anti-semitism or anti-Israel sentiment in Britain and elsewhere will end the problem until its root cause — Israel’s criminal behaviour — is dealt with.”

Protests from two prominent (Jewish) CPB members (Mary Davies and Phil Katz) forced the paper to formally retract that too explicit and candid statement of what, in reality, they believe. Did Davies and/or Katz intervene again to prevent the Lewinski article appearing in print?

Postscript: at least Labour’s got something right in the battle to cleanse itself of antisemitism – getting rid of Chris Williamson.

The Morning Star would simply love to back Williamson (now standing against Labour as an Independent) but can’t because their masters, the Communist Party of Britain, are pledged to call for a Labour vote in every constituency. Nevertheless, the Morning Star is giving Williamson a lot of space – most recently in the November 30/December 1 edition in which this increasingly Gallowayesque poseur issues “A clarion call to end imperialism and change the world.”

According to the Great and Fearless Anti-Imperialist Comrade Williamson, Jeremy Corbyn has sometimes been “forced into a position against his better judgement”:

The consistent indulgence of this — accepting a massively distorted picture of the state of the Labour Party painted by our enemies — only emboldens the racists that have executed this smaer campaign to go ever into rewriting history.

Labour clearly has a long way to go in rebuilding bridges to the vast majority of British Jews: but at least it’s made a start by discarding the loathsome Williamson.