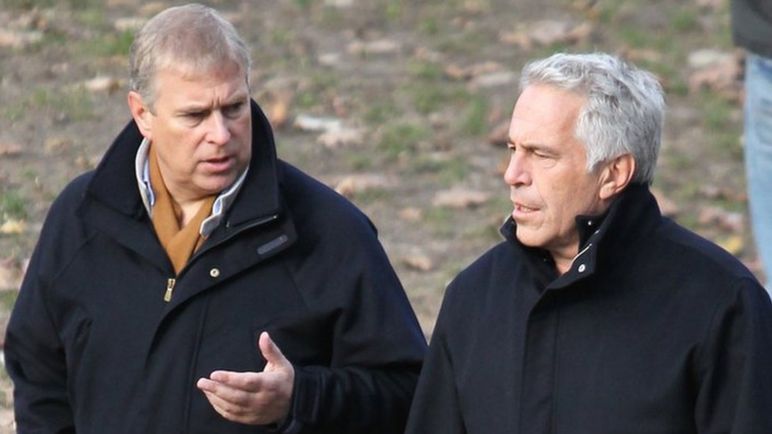 Andrew Windsor with his friend Epstein

The extraordinarily negative response – even from the right wing press – to Andrew Windsor’s performance during his “car-crash” interview with BBC TV Newsnight‘s Emily Maitlis, should help us raise the question of why the monarchy even exists.

It was an exchange that summed up the grotesque arrogance of Mr Windsor as an individual:  his indifference to appalling sexual exploitation of teenage girls by his friend Jeffrey Epstein was sickeningly evident. Not once did Mr Windsor even mention the sex trafficking victims who found themselves forced to perform sexual acts with Epstein and others. No sympathy was expressed on their behalf; no sense of outrage. This lack of empathy revealed a man focused only on his own exculpation.

Even the “mistake” of visiting Epstein after he’d been charged was explained by an excess of virtue, attributable to a “tendency to be too honourable.”

When questioned about Virginia Giuffre, who says that she was forced to have sex with Mr Windsor when she was 17, he simply stated that he had “no recollection” of ever having met her. He did not remember an evening in the home of Ghislaine Maxwell, Epstein’s girlfriend, when he was photographed with his arm around Ms Giuffre. On the  night in question, in March 2001, he did however clearly remember that he was at home with his family, having been to the Pizza Express in Woking.

Mr Windsor came across as a man rendered incapable of normal moral judgment and empathy. But that is not just due to the boorish arrogance of this particularly unpleasant individual: it’s the almost inevitable product of the institution of which he is a part.

The monarchy is not harmless.

The campaign group Republic reckoned (in 2018) that the Royal Family cost “£345m a year. The royals’ official grant alone has jumped 145% since 2012, from £31m to £76.1m. Add to that costs met by councils, revenue from the Duchies and unpaid tax and you can easily see how the royals cost us so much.

It’s only £6 a year for each of us? But to have a plutocrat ostentatiously eating a luxurious dinner in front of hundreds of ill-nourished people is an outrage even if the dinner, divided up, would give each of those hundreds only a morsel.

The Fixed Term Parliaments Act deprived the monarchy of the power to dismiss the government at whim, as the Governor-General of Australia, acting as the Queen’s representative, dismissed a leftish Labor government in Australia in 1975.

But powers remain. That powers to sign international treaties and deploy British troops are reckoned “royal prerogatives” means today that they are exercised by prime minister, not monarchs. Yet the same offence to democracy continues as in the older monarchic constitution: parliament is bypassed.

The Queen and Prince Charles have the power to veto bills that affect their private interests, and it is known that they use their political power, for example by having the NHS spend scarce cash on quack homeopathic treatments because they themselves favour that quackery.

The building up of Harry Windsor as a “nice young man” is not harmless, either. If Parliament is deadlocked, the monarch’s power to choose who should get first chance to form a government can be important. A monarch posing as someone “outside politics” could in a crisis do more easily what Italy’s president Napolitano did in 2011-3, and install a “technocratic” government led by people “outside politics”, or previously “outside politics”, but definitely in the ruling class.

People who wouldn’t dream of fawning before the royals, sometimes defend the institution on the grounds that it attracts tourism. This seems to be about the only rational basis for its continued existence. But even this hardly stands up to scrutiny when one looks 20 miles across the Channel to France, whose tourist industry does not appear to have suffered much since its monarchy was abolished for the last time in 1870. People still visit the Palace of Versailles even though it is uninhabited. Although Britain’s monarchy has not invoked its powers of royal veto and dismissal since 1975 in Australia, the very existence of those powers — and of the monarchy itself — is an affront to democracy.

The monarchy is a financial drain, a political cover for violent reaction, and a reservoir of immense wealth and power obtained solely through accidents of birth.

Its abolition is not something to be put off until some revolutionary future, but a key democratic demand to be fought for now.