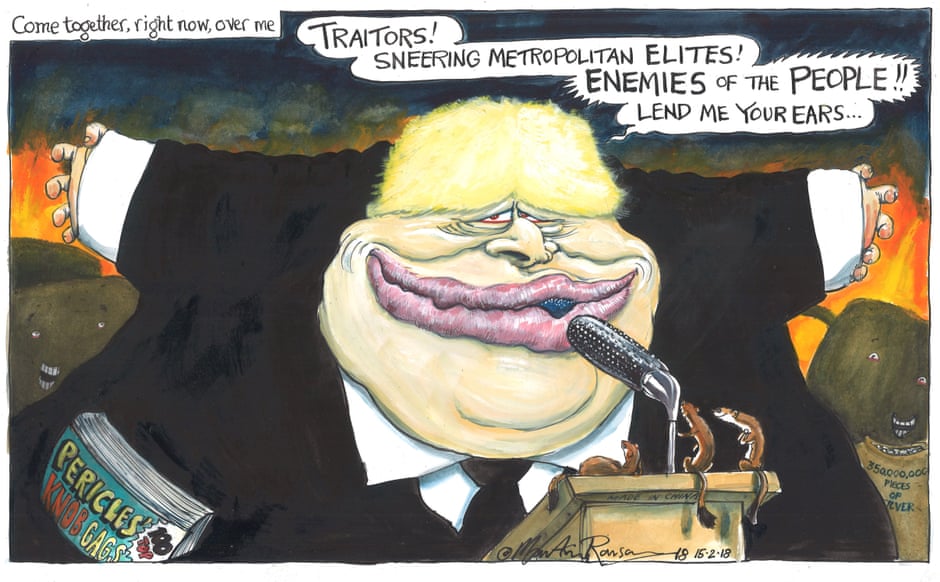 From behind Murdoch’s paywall: now seems as good a time as any to remind readers of former Tory MP Matthew Parris’s evisceration of Boris Johnson in his (Parris’s) Times column of 26 March 2016. It doesn’t touch upon Johnson’s casual racism, but remains a wonderful denunciation of a charlatan who, at the time, was generally getting a good press and even had some people on the left who were willing to tolerate him as a supposedly amusing eccentric:

“Charm can make us forget the dishonesty and recklessness that would be ruthlessly exposed if he became leader,” writes Matthew Parris:

Parody is now extinct. Boris Johnson has killed the distinction between reality and satire.

Remember the Tory who as a wannabe MP called Labour’s repeal of Section 28 “appalling”, who joked about “tank-topped bum-boys”, who sneakily rowed back from homophobia by asking “what’s not to like?” about gays who leave the field of available women clear for straight men?

He is now urging gay men to vote Leave because, he says, some Eastern European countries have legislation that represses them. “It was us,” he burbles on a new Out & Proud video, “the British people, that created [an] environment of happiness and contentment for LGBT people.”

It may well have been us. It ruddy well wasn’t him. But now, even into gay saunas creeps the smell of his damp tweed.

Look, this is a joke but this is not a joke. Somebody has to call a halt to the gathering pretence that if only you’re sufficiently comical in politics you can laugh everything off.

Somebody has to remind us that it’s not enough for those who seek to govern us simply to be: they have to do.

Vacuity posing as merriment, cynicism posing as savviness, a wink and smile covering for betrayal . . . these things are not funny.

So I present you with a mystery. How did we get here, with Boris Johnson? Steadily, almost imperceptibly, an absurd idea has crept upon us.

Had it been ventured nine years ago when the Tories desperately sought a candidate for the London mayoralty, it would have met a hollow laugh.

Since then nothing that’s happened adds to its plausibility. Much has occurred to rob it of any plausibility it ever had.

Yet still the idea has grown: shrewdly, assiduously, flamboyantly puffed by its only conceivable beneficiary. Where else in politics can such self-validating, self-inflating nonsense be found?

It isn’t — believe me, it really isn’t — that Britain could ever want Boris Johnson as prime minister. Travel north of Watford and you’ll abandon that thought.

It is that the Conservative party could have the effrontery even to ask us to.

I feel uncomfortable writing this: writing about a fellow columnist, my former Spectator editor, an essentially liberal-minded fellow Tory, a wonderful entertainer, and a man who has never been anything but friendly towards me.

Scores of media colleagues would say something similar of Boris, would feel the same discomfort, the same sneaking affection, the same restraining instinct to keep quiet . . . which perhaps explains the silence.

I feel uncomfortable too about touching upon sexual impropriety, of which I’ve certainly had my own share, and which (if sexual indiscretion alone disqualified a person from political office) would disqualify some of the best.

And I hesitate to condemn a man for political ambition. But there’s a pattern to Boris’s life, and it isn’t the lust for office, or for applause, or for susceptible women, that mark out this pattern in red warning ink.

It’s the casual dishonesty, the cruelty, the betrayal; and, beneath the betrayal, the emptiness of real ambition: the ambition to do anything useful with office once it is attained.

I will not name two of the women he impregnated, one of whom had an abortion and a miscarriage (she had believed he would marry her); the other bearing his child; and the Court of Appeal judge, refusing a “gagging order” in 2013 to conceal her existence, remarking that the public had a right to know about what he called Johnson’s “reckless” behaviour.

Nor is there space to elaborate on his lies about the first case to Michael Howard, then his party leader, for which Howard sacked him.

Nor on his sacking many years earlier from this newspaper for making up quotes. Nor the broken promise to his proprietors not to run for parliament while editing The Spectator.

Have we forgotten all this?

In parliament Boris has never shone. He was lacklustre as a junior spokesman (the highest Commons post he reached).

His eight years as mayor are characterised by success as a celebrity figurehead and almost no mayoral achievements at all.

But if you want to see for yourself a blustering, bantering hole in the air, watch online his encounter on Wednesday this week with Andrew Tyrie, MP, chairman of the Treasury select committee.

Watch him refusing to admit that his Telegraph claims, that the EU has banned the recycling of teabags and the inflation of balloons by children, were simply false.

Watch a portrait-in-miniature of Johnson the politician: under-prepared, jolly, sly, dishonest and unapologetic but (and this is the worrying part) horrifyingly vulnerable.

If Leave win the coming referendum, as I begin to think they may, a leadership bid by Boris will be imminent. If Remain win, the bid will be delayed but still formidable.

Though I am an admirer of George Osborne, another likely bidder, I accept that he is in serious trouble from which he should not be confident of emerging.

Theresa May has been underrated but she struggles, like Mr Osborne, with the W-thing: warmth.

David Cameron’s consummate recent performances only sharpen one’s worry about the succession. The Tory party is running out of future prime ministers.

So Conservatives stand, as it were, looking across apparently open country towards Mount Boris.

He beckons, and they do not see the great canyon between them and the prize: an abyss into which any electoral adventure would tumble.

The abyss is Mr Johnson’s public and private record.

We don’t seem to see it, yet it stares at us from yellowing newspaper print, from an insuppressible internet, from the public record, from judicial statements, from colleagues’ judgments, from everything we know or ought to know but have been persuaded, such is his charm, to brush aside and forget.

It is all there, waiting. When the media turn nasty, as it will, his powers of laughing everything off will falter.

If Mr Johnson had the sense of nemesis I suspect he has, he should stop now.

And if we Conservatives have the instinct for survival that I fear we lack, then before the NoGoBoJo banner tightens around our party’s neck we on the centre-right should end our affair with this dangerous charmer.

6 thoughts on “Parris on Johnson: “Somebody has to call a halt to the gathering pretence that if only you’re sufficiently comical in politics you can laugh everything off””